A forum community for those gone berserk over wine.

Now even more awesome, as it comes aged in charred whiskey barrels! Micro production, I'm sure. 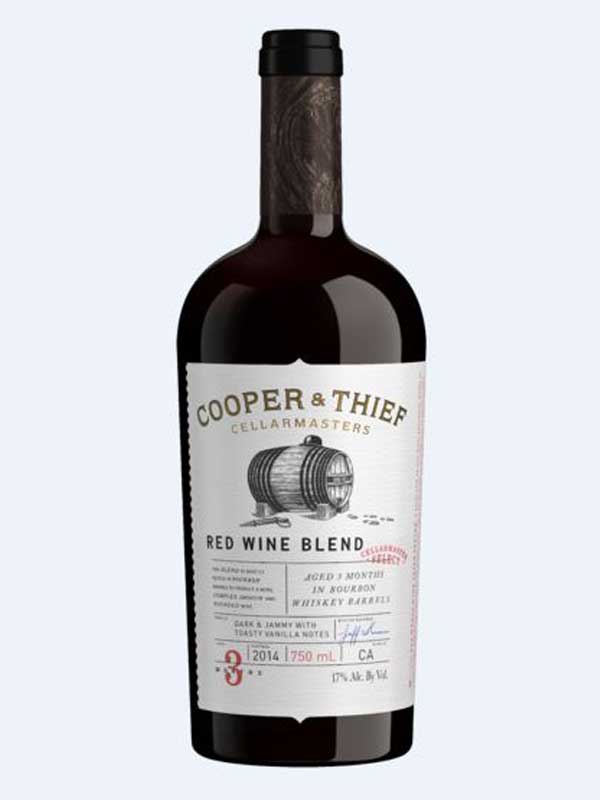 "But they told me there would be a hand basket."

Michael Martin wrote:Parker gives it a 100

But only after they paid $800 for the Benchmarking.

Wine Berserkers, “delight of the incapable and insignificant"!

“Ignorance is a lot like alcohol: the more you have of it, the less you are able to see its effect on you.” — Jay Bylsma

Caymus must be quaking in its staves.
Anton Dotson

What is man, when you come to think upon him, but a minutely set, ingenious machine for turning, with infinite artfulness, the fine red wine of Shiraz into urine?
Top

This is actually how Lodi Flame Tokay, a fortified wine, was traditionally made - whiskey barrels would always ship with some whisky still in the barrel to prevent the staves from drying out. They'd pitch partially fermented flame tokay juice into the barrels and the whiskey would fortify the wine.
P ! g g ! n s

"You keep me searching for a heart of gold" - Neil Young
"Metal heart, you're not worth a thing" - Cat Power
Top

I've had that. Tastes like a red blend mixed 50/50 with vanilla extract. No oak flavor - just vanilla and alcohol. Not a fan.
Top

I've had that. Tastes like a red blend mixed 50/50 with vanilla extract. No oak flavor - just vanilla and alcohol. Not a fan.

So I shouldn't shell out the $28 or something it costs near me just out of morbid curiosity?
"But they told me there would be a hand basket."


Agree. I'm seeing more and more of these types of wines showing up in stores. Pretty smart marketing when you think about it. Capitalize on the current market's like of this kind of stuff and I'm sure they sell a ton of it at a pretty good margin.
I'm a Port drinking fool!
http://www.fortheloveofport.com" onclick="window.open(this.href);return false;
http://www.ftlop.com" onclick="window.open(this.href);return false;
Top

Are there non-charred whiskey barrels?

That was sort of my point.
ITB
Nolan Ellis
Top

Nolan E wrote:That was sort of my point.

However, yes, bourbon has laws, but I'm not sure about 'whiskey.'

From what I recall whiskey does too. Granted you could use a #1 char which is technically charred but for some crazy little amount of time. I'm a bit rusty but I think it goes up to a #7 or 8 char. I vaugly recall someone using one of the top chars at one point. How that would translate into wine use I'm not sure. I'd imagine a #6-7 char would mean you wouldn't want to leave wine in it too long, even for a used one. But a #1 is relatively little charring and perhaps may work better for wine aging???
I'm a Port drinking fool!
http://www.fortheloveofport.com" onclick="window.open(this.href);return false;
http://www.ftlop.com" onclick="window.open(this.href);return false;
Top

Yeah, I edited my post after you quoted me, I started thinking about the commercial moonshine products and don't remember seeing one labeled 'whiskey' so I'd imagine you're on the right path.

Even if you aged spirit in uncharred barrels I wonder how much color you can really pull from the wood.

As these wines tend to be higher ABV, would you want more of that up front oak to help offset the higher alcohol or would you want less?
I'm a Port drinking fool!
http://www.fortheloveofport.com" onclick="window.open(this.href);return false;
http://www.ftlop.com" onclick="window.open(this.href);return false;
Top

With 'these' wines I think it's all about the vanilla and mocha notes, but I doubt they're using new or high quality barrels. Probably a combination of old, cheap barrels, oak chips/powder and various other flavor/texture enhancing additives.
ITB
Nolan Ellis
Top

I've had that. Tastes like a red blend mixed 50/50 with vanilla extract. No oak flavor - just vanilla and alcohol. Not a fan.

So I shouldn't shell out the $28 or something it costs near me just out of morbid curiosity?

Yes. And bring it to your monthly brown bag tasting. And post notes from that lawyer friend of yours that got banned from the site. Could be classic.
“Dammit Brian, until you tuited this diatribe, I was haiku aging my sh*t.“
(Country Squire, circa 2020)
Top

IIRC, by law they have to be charred.

It's illegal for me to wear non-charred assless chaps?
Ron
Top

My father used to say, never throw away a tie because everything comes back into fashion.

Same thing with winemaking. Used bourbon barrels were popular in the 70s but they were steam cleaned first. Of course, Bourbon was going out of fashion then.
ITB
Top

I wonder if it's hand-crafted.
Top

Wines like these are also intended to go after the burgeoning craft beer market. One of the major differences between beer nerds and wine nerds is that the former are super cool with all kinds of human intervention in production ("we added chococlate nibs" "Bourbon barrels!" "Brewed with chipotle!" "We added 18 strains of Brettanomyces!"). Wine nerds hate that stuff. Though Field Recordings did bring out a hopped-wine this year - which FWIW, the sub-30 market loved where I am.
Jim Coley ITB

"So I say, like Ortega y Gasset, that when a lot of people agree on something, it's either a stupid idea or a beautiful woman." - Alvaro Mutis

"You could spend a lot more money, and not get a better Burgundy...” - Carlo Rossi
Top

I may have a bottle of this at the house, not sure. Someone gave us a 3 pack of Apothic red wines for Christmas, i know we got the Red, and The Dark, don't recall what the 3rd one was. Looking at their offerings, it must be either the Crush or the Inferno. I've been thinking of making mulled wine with the Red, as I generally dislike it.

I like bourbon barrel aged stuff in general, never had a wine with such treatment.
WOTY:61 Chateau Verdignan
Top

Interesting that they could call this wine "Inferno". Shows how much the TTB
knows about Valtellina Nebb.
Tom
Last edited by TomHill on October 20th, 2017, 8:01 am, edited 1 time in total.
Top

Mel Knox wrote:My father used to say, never throw away a tie because everything comes back into fashion.

Same thing with winemaking. Used bourbon barrels were popular in the 70s but they were steam cleaned first. Of course, Bourbon was going out of fashion then.

That's why you're still hanging onto those bell-bottoms, Mel??

Joe Swan made his first Chard in '73. Followed ole Joe from the very start. Joe, being the pinch-penny that he was,
wanted some oak on that wine but was too cheap to buy a new (or used) barrels. So he hauled a$$ down to HomeDepot
(or whatever was in vogue then) and bought several used whisky barrels that were intended to be made into planters.
EeGads...the $$ he must have saved.
He tore the barrels down, shaved off the inside layer on the staves, and put them back together, then filled them
with his Chard. He tasted me on it and it had a distinct whisky/Bourbon flavor. Joe hated it. I thought it was
pretty exotic/unusual expression of Chard. And it aged in 10 yrs into a very/very interesting Chard.
On that same visit, there was some young guy topping barrels in the distance, wearing a worn green plaid flannel shirt.
Joe wanted me to meet him...."Joel Petersen...helps me out here in the wnry". I seem to recall the guy went on to
make a name for himself under some other venue!!

Mel Knox wrote:My father used to say, never throw away a tie because everything comes back into fashion.

Same thing with winemaking. Used bourbon barrels were popular in the 70s but they were steam cleaned first. Of course, Bourbon was going out of fashion then.


My great uncle kept a closet full of thin ties while wide ties were the only thing people were wearing with the exact same reasoning. It made me disproportionately happy that he got to wear them again before he passed away.
Ripe fruit isn't necessarily a flaw.
Top
Post Reply
28 posts • Page 1 of 1