A participant of three of my dinners wanted to organize one in his city, Le Mans. He suggested the restaurant run by a chef who has one Michelin star. I like these challenges and after email exchanges and telephone discussions, the project has been put on track.

Two days before dinner, I come to deliver wines to the restaurant Le Beaulieu that has the chef Olivier Boussard, which has one Michelin star for 16 years. We take the opportunity to develop all the dishes.

Two days later I'm back in Le Mans for the dinner at the restaurant Le Beaulieu. The menu was developed with Olivier Boussard, who has agreed to adapt his recipes to the needs of ancient wines.

I arrive at 4 pm to open the wines, in front of Olivier and Guillaume, very attentive. No perfume seems to me to pose any particular problem and the operation is conducted in an hour and a half for 8 corks, as the champagnes will be opened later. Many plugs broke, but were healthy. The only one to have its blackened surface is that of the Grands Echézeaux Domaine de la Romanée Conti 1952. It remains for me to wait for the guests with a glass and then a second draft beer and small things to nibble including a delicious pie. I have time to answer the telephone questions of a journalist from a local newspaper who was informed of the dinner by the chef.

There are eight of us, including one woman, the wife of the initiator of the dinner. All are from Le Mans, from various professions including trade, finance, building or wine.

Champagne Dom Pérignon 1993 is a very nice surprise, because this year long considered in the small years has developed now. It is a champagne of charm, of beautiful enjoyment. If the bubble has almost disappeared the sparkling is active. It is full on the palate, wide and welcoming.

Champagne Heidsieck Monopole Cuvée Diamant Bleu 1982 is the opposite of the previous one. He is lively, deep, chiseled, and younger than Dom Pérignon when he is eleven years older. It is difficult to know which one is preferred, as they are different. I have a weakness for the vivacity of 1982 while others succumb to the charm of Dom Pérignon.

The scallops are associated with two white wines. The Château Haut-Brion Blanc 1952 is very impressive because it is of absolute purity, fluid, complex and of great length. He is almost sweet. It's an archetypal white Haut-Brion, in the definition of what this wine should be, but in a slightly botrytised version, as we sometimes see for the Yquem Y's. Its color is very clear. I had talked about my vision of the wine that I consider eternal as long as the cork plays its role and here is a white wine of 66 years is dashing like a wine of twenty years. Many "certainties" about old wines will fall tonight.

The Bienvenues-Bâtard-Montrachet Bouchard Père & Fils 1960 is a bit amber. His nose was racy at the opening. It is so now and the wine is well balanced and courteous. He does not try to seduce or show his strength but it is devilishly effective. This very serene wine is pleasant and its acidity is well dosed. I love him very much, but the Haut-Brion is so noble and racy that my heart will go to Bordeaux.

The saint-pierre is accompanied by two red Bordeaux. The Chateau Beychevelle Saint-Julien 1928 seems to me the best of those of 1928 that I have drunk, for the simple reason that it is perfect. Its color is pigeon red blood of a beautiful youth and his mouth is so perfect and balanced that one could not imagine that it can be bigger. This wine is greedy, lively and joyous, with nice truffle notes, but its essential quality is that it is full in the mouth.

The compliments that can be made in Beychevelle are worth, word for word, for the Grand Vin de Léoville of the Marquis de Las Cases Saint-Julien 1945, because it is also perfect. Its color is a little less bloody than that of 1928 and seems a little younger. It is more fluid but with incredible finesse. Perfect wine and racy, this dazzling wine will be the first in my vote. Having two bordeaux at the peak of their craft to the point that one can speak of perfect wines is unexpected. My guests make the accounts: a 90-year-old wine and a 73-year-old wine are livelier and richer than recent wines. All received ideas fall.

The lobster is served and Guillaume, the excellent waiter and sommelier will serve the Volnay Pierre Léger 1937. I realize with amazement that we have shifted the dishes compared to the wines having served the second champagne as an aperitif instead of accompany the scallops, because the lobster was intended for the two Bordeaux. We have to order a wine for the doe, because the Grands Echézeaux would not go with this dish. I consult the wine list and I order a Peyre-Rose Syrah-Léone Coteaux du Languedoc 2005 which will be served thereafter.

The lobster is delicious and the Volnay Pierre Léger 1937 is a very happy surprise. This wine is much more racy and rich than I imagined and it has a beautiful personality. It has a beautiful Burgundy wine grater and is lively, with no trace of age. A very nice simple wine goes with lobster when it had to accompany the doe. The agreement is relevant anyway.

The Peyre-Rose Syrah-Léone Coteaux du Languedoc 2005 Marlène Soria is a wine that I particularly like. Anachronistic in this dinner it makes aware, despite its real interest, the gap that exists between young wines and the complexity of ancient wines. It goes very well with the delicious truffled doe.

The planned program resumes its course with the foie gras that accompanies the Grands Echézeaux Domaine de la Romanée Conti 1952. The level in the bottle was quite low but acceptable for old Burgundy. The nose at the opening was promising and flourished and it is in the mouth that things are not as good. We recognize an aerial wine and Romanée Conti by finesse and delicacy, but the wine is quite roasted, which removes a lot of charm. The agreement with the liver is sensible, but this wine is the only one of the meal which is of a lower level than one could hope for.

The Château d'Arche-Lafaurie Sauternes 1925 has a very dark color. At the opening the nose had accents of caramel which pushed the chef Olivier to pan the slices of mango and lighten the proportion of pink grapefruit. For the moment he cohabited with a superb stilton to produce a first-rate chord. The wine is rich and full, merry, fat, beautiful greed. My neighbor is impressed by the change of Sauternes' tone between his cheese association and his cronyism with mango, as if they were two different wines. Both combinations work perfectly and this sauternes of good length is a great sauternes.

The cork of the 1870 Cyprus Wine was so stuck to the glass of the neck that I was afraid of pulling too hard to crack the very fine glass. So I cleaned the top of the cap which unfortunately dropped the cap in the liquid. So that there is no pollution of the liquid, I decanted the wine and I then removed the bottle cap from the bottle, and put the wine back into the bottle. This rapid oxygenation had no effect on the wine, which is incredibly rich. It is a pepper bomb, also marked by a strong presence of liquorice, which makes the agreement with the liquorice financier is the best gift there is. This infinitely long wine is extremely dry like a sherry while keeping the creamy liquoreux. He is infinitely racy. I love it because of its wild and uncompromising nature.

Of the ten wines, nine were at the top of their game. We are eight to vote for the four wines that we prefer over the ten wines of the dinner (the 2005 will not be noted). Five wines had the honor of being named first, which is a remarkable performance, the 1952 White Haut-Brion three times first, the Léoville Las Cases twice, and the Bienvenues-Batard-Montrachet, Beychevelle and Cyprus each once first. The votes are very curious. Thus the White Haut-Brion was only four times in the votes but three times first while the Beychevelle received eight votes, being retained by everyone, with only one place of first and six places of second. As for the Cyprus wine, he had seven votes, four of which were fourth.

For a first experience with Olivier Boussard, it's a real success because the combinations food and wine were superb, even if the program was not perfectly followed, because the recipes were perfectly readable. The most natural are the financier with the Cyprus wine and the stilton with the sauternes. The most successful dishes are the poached foie gras in its refined simplicity and the deer with cepes, gourmet dish par excellence. The talent of a chef exists, even when the recipes are simplified.
The ideas about the old wines of my guests were turned upside down. They will never look at old wines again with the same eyes. It is quite possible to see me again at Le Mans for other adventures.
Kind regards

What is interesting is the variety of votes (the votes of one guest are in one column, mine in the first column) 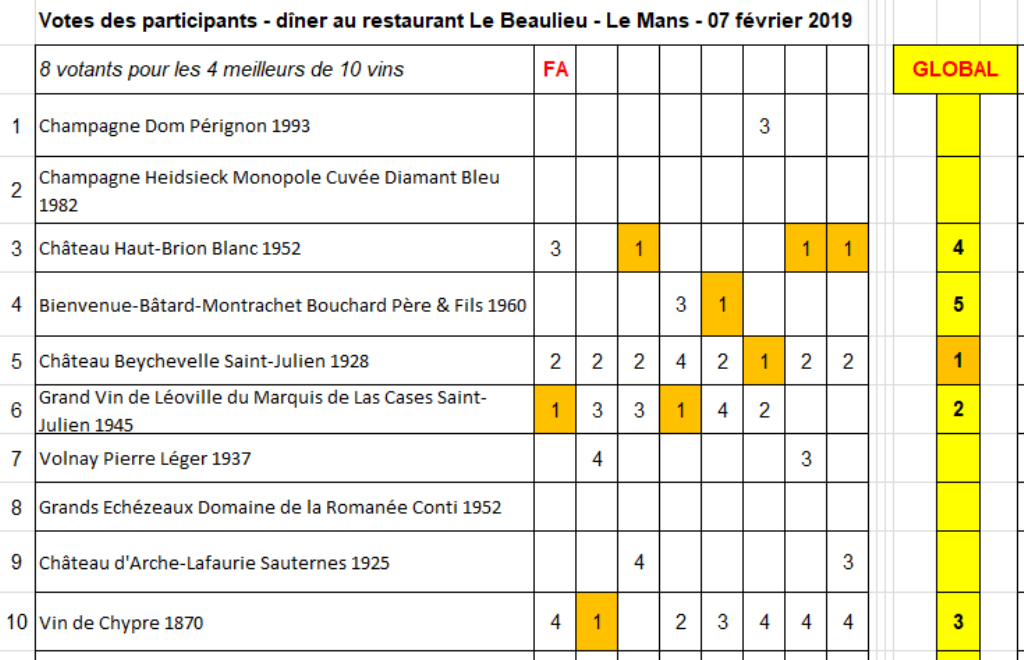 I have been neglectful for too long, thank you so much for sharing your tastings and giving us the chance to experience your rarified realm in the wine world from backstage preparations to evaluations.
The time you spend documenting your events is appreciated by us now and by the curious in the future. How else would we know?
ITB
Top

Great notes as usual, thank you.

The 1928 Beychevelle along with the 1959 is considered the best Burgundy made in Bordeaux. I gather youdidn’t find any Burgundian notes in it.
ITB
Top

Thank you for your notes Francois. Cyprus did and still does make special wines.
Instagram: grapeexplorer
Top

Francois, your description of the evening is so vivid and alive, as I read, I almost feel I am there with you.

Thank you for the experience!
Cheers, Peter
Top

Thank you for the nice comments.
Kind regards